After Death Care and the End-of-Life Doula 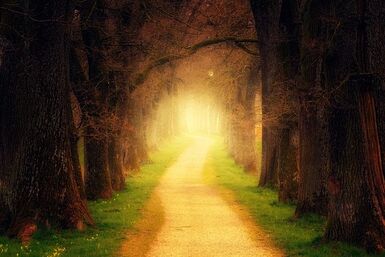 It’s exciting to see the exponential growth of end of life practice, something we in the home funeral movement tried to imagine years ago when we took up this work. Now, just as we envisioned, families are increasingly seeking to change the way they meet the challenges inherent in planning for and managing the death of a family member, and they are looking for guidance and support in fresh ways that span both the dying and funeral periods.

But what we learned early on that holds true even more today is that death is the great divide, at least as far as systems go. Some end-of-life care practitioners train for both pre-death and post-death, with an intention of meeting families’ needs with a seamless home-based continuum of care, a philosophy we have cultivated and supported wholeheartedly. But there is a problem that needs to be addressed, and quickly, and it falls to end-of-life doulas and their trainers to fully understand.

There are very different legal requirements governing what practitioners can and cannot do, and what services they can and cannot charge for, once the last breath is taken. It is imperative that all practitioners understand and heed this difference. By failing to recognize and abide by the laws that pertain to after-death care, end of life doulas are undermining, even threatening, all the hard work that the home funeral community has established over the years to protect the innate rights of families to care for their own dead.

After-death Care is a Regulated Industry
So what’s the big deal? You’re present when the death occurs and it’s only natural to keep going by bathing the body and washing the hair, dressing and filling out paperwork and making calls for the family, right? Wrong, and it can land you in a whole lot of hot water.

Once the dying become the dead, doulas enter the well-organized, licensed, and highly regulated profession of funeral directing. Industry professionals have guarded their place in the after-death world for over a hundred years, and they have the deep lobbying pockets and regulatory authority in every state to make sure that everyone plays by the rules. And they have the ready ears of legislators who almost always enact laws they suggest that protect the industry. There are already nine states that compel families to hire professionals to do things they are entitled in other states to do themselves. The potential for more laws in more states restricting families and forcing them to take on the financial burden of hiring a funeral director is what is really at stake here, and doulas have an obligation to adopt behaviors and practices that don’t set off this chain of events.
To put an even finer point on it, in every state, those rules mean that while families may retain custody and control of their own dead at least for the vigil period, this pertains to the family only, not unlicensed, paid helpers who assume roles and activities similar to funeral directors. After-death care falls squarely under mortuary regulatory board jurisdiction and state statutes. In some states, those rules include the simple act of assisting a family with “funeral planning” or “making arrangements”. Providing paid body care without a license is against the law, period.

When Tom, a third-generation funeral director who is supportive of end-of-life doulas contacted me, I realized this issue is not going to go away until end-of-life community leaders address it. A young, energetic, and innovative thinker, Tom was eager to engage with a doula in his area and reached out to see how they could work together. Shortly after, he was in a conversation with a local hospice nurse and learned that the doula had sent them promotional materials that advertised her business to include charging for funeral planning, performing ceremonies, body care, transportation of the body to and from the home, and the list of regulated activities went on. Tom was struggling with the ethical decision of whether to report her to the Mortuary Board for practicing without a license, and the hospice was considering whether they could continue their relationship with her. In one fell swoop, this doula had burned her professional bridges and endangered the practice for all out of ignorance of the laws surrounding after-death practices.

Because of my longtime involvement with funeral reform, I’ve had the opportunity to hear from industry professionals about their concerns at a variety of levels. I have received more personal calls from funeral directors like Tom in the past year than in all the others combined, expressing frustration and anger specifically with doulas who they perceive are crossing into their work in ways that are legally and ethically questionable. Many others have tried to create partnerships with doulas and walked away. This is having serious ramifications for doulas, guides, and families.

Home Funeral Advocates Have Already Laid the Groundwork
Home funeral advocates soon realized they were up against a regulated industry and that their first priority was to educate and empower the public rather than expend resources or social capital toward professionalizing. After-death care educators were encouraged to partner with funeral directors in their communities, and many of the movement’s leaders were funeral directors. This positive working relationship—and the perception of practitioners as well-informed and collaborative—is of paramount importance in being able to continue serving families.

Home funeral advocates have been actively working to protect the rights of families while providing guidance to those who wish to empower those families for years. Several books, white papers, and articles have been published to address specific legal and movement concerns that doulas need to read and understand in order not to endanger the entire movement, and most critically, the rights of families to care for their own dead.

The book Essentials for After-Death Care Educators was written to clarify the laws in stark detail. It includes information from a broad range of reliable sources, including the Federal Trade Commission, the federal government agency that oversees the funeral industry and anything related to it, including home funerals. It is chock full of forms and lists critical to operating within the law for anyone providing after-death care who is not licensed.

Protecting the Legal Rights of Families
Looking for a method fro recognizing competence that would provide families and other professionals with assurance that practitioners knew what they were doing was also at the forefront of home funeral thinking. Certification might imply that it is necessary to hire someone to help, the very thing home funeral families and advocated are rejecting. The absence of funeral industry or governmental certification is a direct result of the existence of mandatory licensing for funeral directors who call the shots.

And that is the crux of the matter for end-of-life doulas.

As stated, anyone practicing funeral directing without a license endangers the rights of families to continue to care for their own dead. Doulas have a moral duty to be trained by seasoned, legally savvy home funeral trainers if they choose to take up after-death care, if for no other reason than the doula code of ethics: “…to act honestly, truthfully, and with integrity in all transactions; comply with both the spirit and the letter of the law; act responsibly toward the communities in which they work and for the benefit of the communities that they serve; and be responsible, transparent, and accountable for all their actions.” But the most important reasons can’t be minimized: not knowing and following the law endangers the rights of families and has the potential of undermining our very constitutional rights pertaining to family rights.

In case this sounds like territorialism, let’s be clear. It’s not the fine line between doulas and guides that has me sounding the alarm—it’s the big thick line between end of life practitioners in general and the funeral industry and state laws.

The good news is that there is at last a way for after-death practitioners to demonstrate their competence, even without independent certification. The National End-of-Life Doula Alliance offers proficiency assessments in After-Death Care Education and End-of-Life Doula Care. These micro-credentials together provide a measurable way of establishing mastery over a shared knowledge base for practitioners of both pre- and post-death care that translates into a trust relationship with other professionals and the families they serve.

Blurring the Lines with Titles
Another issue is rearing its head again, causing confusion and mistrust in the public sector and with funeral professionals. Early on, it became obvious to leaders in the home funeral movement that creating a cohesive, central language around the work was critical for public acceptance and the ultimate success of the movement. The terms “death doula” and “death midwife” were originally used specifically in conjunction with after-death work, and in particular honoring home funeral teacher Jerrigrace Lyons. They have both been replaced by the term “home funeral guides” to better reflect what they do. [Editor’s note: By 2020, the term “after-death care educator” had supplanted the term “home funeral guide”. Every effort has been made to update this terminology as appropriate.]

After the NHFA conducted a survey of stakeholders, the results were published in Clearly Defined: Matching Our Terminology to Our Intentions, written by Donna Belk, Kateyanne Unullisi, and Lee Webster to clarify not only the names we call ourselves but to further define the areas each encompasses (included in Essentials). One of the most important upshots of that study was the rededication of the home funeral community to staying in its lane, focusing exclusively on becoming the lead authority on non-professional after-death care. The decision to stop using a term that denotes serving (doulas) and instead use one that describes a teaching role (guides) was deliberate and hard won.

The recent rise in end-of-life doulas has in some ways re-blurred the lines, especially when there is after-death service tied to them and they are going by the death doula title. This has caused leaders in the doula movement to determine the importance of using the full title of “end-of-life doula” in order to not confuse the people we are trying to serve. The name and EOLD acronym are quickly becoming the accepted terms used in colleges and universities who are offering accredited courses in pre-death doula care, and the media seems to have adopted them as well.

Including After-Death Care in Your Practice
You can begin to see the potential effects these considerations may be having on existing communities and on doula practice as it unfolds that pertains to handling after-death care. The next move is to create a clear understanding in the EOLD community of the critical need to protect families’ rights by not taking on that aspect of service without appropriate, targeted training. After-death care educators, many of whom have been teaching for more than twenty years, can provide the extensive legal and practical information necessary to protect doulas from being brought up on charges of practicing without a license.

There is a great deal that goes into understanding the exacting processes and requirements involved in guiding families who choose to conduct death to disposition care of their loved ones, many of which are state or even county specific. After-death care educators are often in the position of ciphering between laws and policies in hospitals, hospices, care facilities, government offices, and other entities with highly developed bureaucracies that in many cases can be adversarial in tone. These are not arenas to enter into without informed strategies, solid knowledge of the facts, and a diplomatic attitude.

Doulas hoping to serve families after the death occurs are urged to look into options for training and becoming educated about home funerals. Together, educators and doulas have a great deal to offer that will ultimately achieve our shared higher goal: to change the culture around death to one of integration and acceptance. 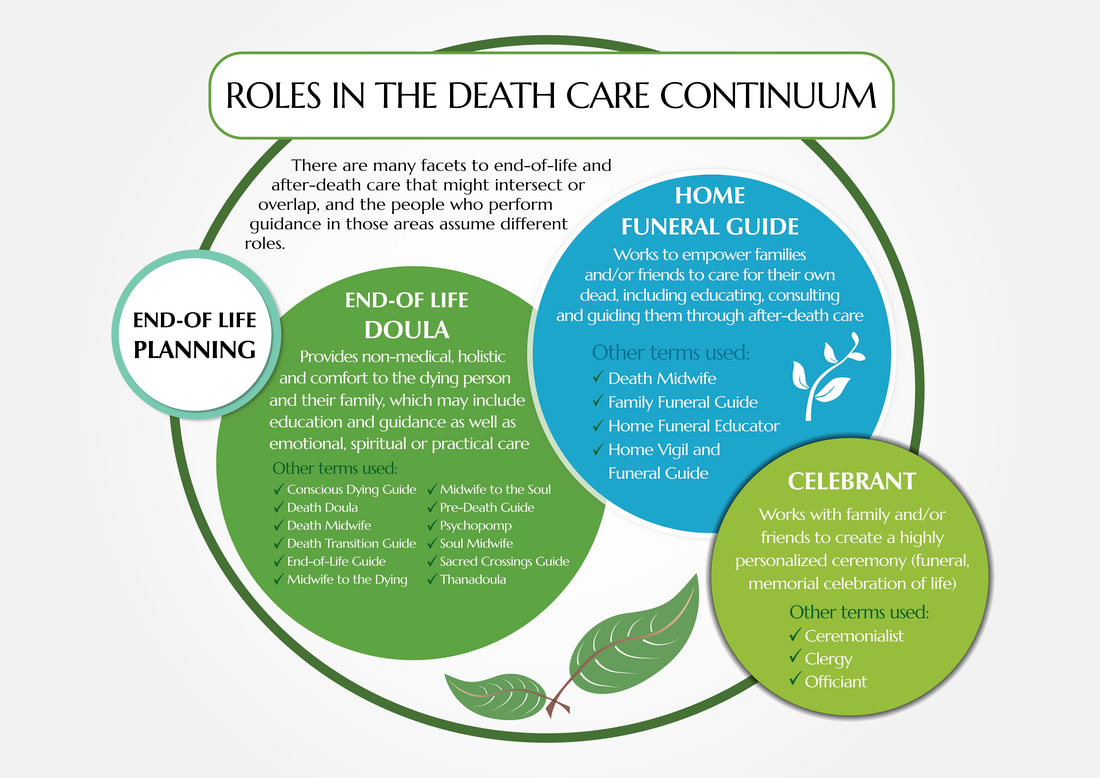